If you’re looking for information on either Skillpay or Internet Income University then, you like me have come to the party a bit late.

As of November 5th, InternetIncomeUniversity.com now redirects to Skillpay.com and the membership for Skillpay.com is now closed so it’s a little difficult for me to share my opinion on whether I think either product is any good.

However from the little bit of research I have done I found that Internet Income University is owned by the same guys who created Skillpay.com who people in the IM community refer to as the Blues brothers. 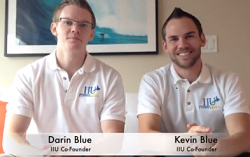 Why? Which was the first thing I asked. Well, turns out they’re brothers, last name Blue, first names Kevin and Darin.

From what I read online (reading through a few reviews) it appears as if both products have generated some pretty good feedback from a number of experienced Internet marketers.

With Skillpay, even those Internet marketers who found flaws in the products still gave it a thumbs up. So I guess this is a testiment on how good the product might have been if I was able to gain access to the content.

I do know that Skillpay focused quite heavily on sourcing it’s traffic from paid social media advertising namely Facebook. And I guess if you’re strapped for cash then this method might not be your cup of tea.

Paying for traffic is great if you already have a converting website. It’s a great way of doubling up on an already converting website, however if you’re starting out it can be difficult finding the balance between spending money on ads verses making a profit from the expenditure.

When it comes to choosing a prefer method of getting traffic to your website or an affiliate offer, it is best to stick with one source at a time, whether that be free traffic as in search engine traffic or paid traffic like Google adwords, Bing or Facebook.

Master one traffic source at a time and then start branching out into other areas of traffic.

My preferred traffic source is search engine traffic, simply because either way you go (either paid or free), you still have to create enough high quality content for people to establish a relationship with you. And search engine traffic converts the highest out of any other traffic form.

Anyway, it does look as if Internet Income University (IIU) has been superceded by Skillpay.com so we won’t be seeing it around in the near future, and it looks like Skillpays membership is (for the time being) CLOSED.

If they open up their membership in the near future then I might check them out again.

In the meantime, you can check out my favorite online business opportunity here.

Internet Income Academy Review – Is It Just Another Scam?

Work At Home University Review – Is it Legit?