Answering surveys are probably one of the most popular and common opportunities you can find for making money online.

When you search the internet for opportunities, you will see that a lot of them involve answering surveys. But since there are a lot of survey sites out there, finding the best one can be difficult.

There are a lot of scam survey sites out there or survey sites that offer very low-income potential, so finding the best one might require some research.

For this review, we’ll talk about one of the oldest survey sites called American Consumer Opinion. It’s a survey site that will pay you in points, which you can redeem for cash after you reach the minimum cash out.

From the looks of it, it seems like you can only earn about $10 a month or slightly more with this opportunity. But is this really legit or just another scam that you should stay away from?

American Consumer Opinion Surveys is a Legit Opportunity That Pays

American Consumer Opinion was established in 1986 as a mail survey panel and membership was limited to the U.S. only. In 1996, it went online and it started accepting members from all over the world.

The company’s surveys seek opinion on a variety of topics, including what they feel about the current economy, why they purchase and use certain gift cards, and more.

Members will be paid in points, which they can redeem for cash after reaching the minimum cash out requirement.

Based on what I’ve seen so far and what others have been saying, American Consumer Opinion is a legitimate survey site that really pays its members as long as they reach the minimum cash out.

There has been little to no issue at all about the company not paying or payments being delayed, so you’re at least assured that you will be getting your money here.

As for the earnings, it seems that $10 a month is likely the biggest you can earn from answering surveys here. As we continue further with this review, I’ll discuss why.

The American Consumer Opinion Surveys is designed for two groups of people with one being the company’s clients who will be providing the different surveys for its members.

The other group are people like you who are looking for ways to make money online and taking a chance on opportunities to earn answering surveys.

For businesses and market researchers, American Consumer Opinion provides them with a proven and tested track record of doing market research through surveys they provide.

The company has been in business for decades, which shows that their services are effective to allow them to last this long in this kind of industry.

They are likely doing something right since there are a lot of businesses who still use their services. As for people like you, the website offers an opportunity to make money online.

The site has been proven to pay its members and becoming a member is not that hard to do. In the next section, I’ll discuss more in detail how you can make money with this website.

How Do You Make Money with American Consumer Opinion Surveys?

The main way you can make money with American Consumer Opinion is through answering the surveys that they provide.

Now, there are two types of survey questions that the company provides. One is the screener and the other is the actual survey.

A screener is basically a short survey, usually consisting of only 20 questions or less. Screeners will usually ask questions about your work, like your responsibilities, the industry that you work in, and so on.

It is important that you are honest with your answers here as they will help the site determine what kind of survey topics they should be inviting you to answer.

You will usually get 5 to 50 points for completing screener surveys. However, there will also be times where you will receive an entry to a raffle draw, where you can win gift cards, gift codes, or other prizes.

The other type of survey is the actual survey that American Consumer Opinion gives. The actual surveys are usually long and will be asking more about your opinions and experiences about a product or service.

Now, since they are longer, the site will pay more once you complete them. You can earn 50 to 5,000 points for each completed survey, depending on its length.

Unlike screener surveys, completing an actual survey will only earn you points as the company won’t give you free entries to raffles for these.

The points you earn can be withdrawn for cash and the minimum requirement will be $10, which is equivalent to 10,000 points. This means that 1 point equals to 1 penny.

The company can pay in cash if you reside in the U.S. or Canada. If you reside outside of these two countries, you can receive your money via PayPal or Hyperwallet.

You can also choose to donate your earnings to charity or enter the sweepstakes. Now, reaching 10,000 points doesn’t seem that hard considering you can earn as high as 5,000 for just one survey.

So how come only $10 is the maximum amount you can earn with this opportunity? The answer lies in the number of surveys you can get with American Consumer Opinion.

Some claim that you can likely only get about 1 survey a week. And when you get it, you will need to answer it almost immediately before it’s taken down by the company.

Looking at websites FAQs page doesn’t provide much confidence about the number of surveys you may get as they mention you can only expect to receive survey invites several times a year.

The company also doesn’t have a referral program to help you increase the points you earn, but they do have an affiliate program, but that is separate from your account in American Consumer Opinion.

You can earn $1 for every person that signs up using your affiliate link and is able to complete a new member survey.

The problem is that they only accept leads that come from the following countries: the U.S., Canada, The UK, Germany, and France. Any other leads outside these countries will automatically be reversed every 20th of the month.

What I Liked about American Consumer Opinion

Now that we know more about what American Consumer Opinion is and how it works, it’s time to discuss what I liked about their opportunity.

Like any other opportunity, there are also things that are not good with the opportunity that American Consumer Opinion offers, which I’ll discuss here.

Is American Consumer Opinion to be Recommended?

From what I’ve seen from American Consumer Opinion, I can say that it is something worth checking out, but not really recommended. 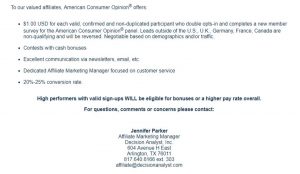 The company has been proven to be legit and will really pay you once you reach the minimum cash out requirement. But the income potential is very low.

There are a lot of better opportunities to make money out there than what American Consumer Opinion can offer you.