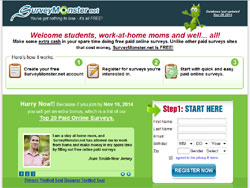 What is Survey Monster?

Survey Monster is just like any old online survey rewards platform. It purports to reward its members with various forms of compensation (e.g. cash, free products, and other prizes) in exchange for the time and effort that they will spend on answering surveys and questionnaires that third-party marketing research companies have put up on the site.

Survey Monster is based in the United States; a simple WhoIs look up will reveal that its owner is Gary Paul from Leadmonetize, an online list management company in Miami.

To Survey Monster’s credit, the site has a brief, yet succinctly clear, outline on its homepage (www.SurveyMonster.net) about how its members are supposed to make money with the service.

First, they need to sign up for an account (registration is free, unlike other survey taking websites), read through the survey-taking tips that the Survey Monster team has prepared, pick out the kinds of surveys that they are suited for or are interested in, and then get started on answering the surveys.

Survey Monster claims that there are various kinds of stuff that people can do on the site to earn rewards.

There are short qualification surveys (which usually takes around five minutes to complete) and longer research surveys (15 to 20 minutes).

Apparently, Survey Monster also rewards its users for reading emails- the FAQ page (http://surveymonster.net/faq) states that people can earn anywhere from $1000 to $1800 just from reading the email newsletters from the site’s advertisers.

Are There Any Issues With Survey Monster?

For sites like Survey Monster, it always pays to read the fine print. While the frontpage of these kinds of sites are glamorously enticing (Survey Monster even has some faux-reviews on their frontpage that come complete with stock pictures of some random people) with their promises of earning easy money with easy jobs, their Legal Disclaimer page usually reveal the truth about their schemes.

Reading through Survey Monster’s Disclaimer will show a lot of inconsistencies with what the site promises and what it can REALISTICALLY give to its members.

First off, Survey Monster states that there is ABSOLUTELY NO GUARANTEE that anyone can make money off the site.

Another glaring issue is Survey Monster’s policy with its advertisers. While the site does have anti-spamming regulations (http://surveymonster.net/antiSpam), it covers only spam offenses made by its own users (i.e. people can’t go around sending their Survey Monster referral link to people they don’t know).

The site offers no sanctions against advertisers who spam the site’s users with unwanted newsletters.

This fact has been stated categorically in the Disclaimer page.

The reviews for Survey Monster (enter “surveymonster.net review” on Google) are less than stellar.

People are taking issue with the fact that most of the surveys that are posted on the site come from other survey-taking sites, that are encouraging Survey Monster users from signing up on their own survey directory platforms.

Some of these third-party sites also have a minimum rewards amount threshold that members need to reach before they can cash out.

Do take note that these sites are all outside of the Survey Monster platform, so members will need to sign up one by one on these sites if they ever want to start filling up on surveys.

Among survey sites that are available on the Web, Survey Monster is among the worst. It does not even try to act like a middle man that connects market research companies to willing consumers.

It’s just a site that lists down OTHER survey-taking sites, in exchange for people’s private information.

It is a very shady enterprise that can severely compromise the privacy and security of people who are lured by its promises of easy money.

If you want to earn money online, then sites like Survey Monster is definitely not the way-to-go.