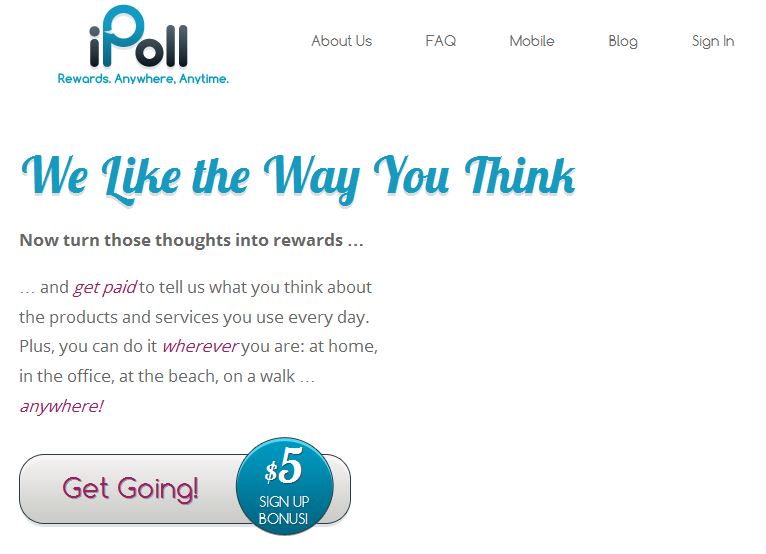 iPoll, once known as Survey Head, is yet another pollster based in the US and can be found at iPoll.com. They also go by the name uSamp and own another survey panel called Opinion Place.

iPoll is, unlike other pollsters, very heavily mobile-centered. This enables users to access the surveys and complete them through their phones. You can even fill them as you as you travel to work or from work in your train or bus.

It pays users cash through PayPal.

One distinguishing thing with iPoll is the barrage of criticisms leveled against it by its users. In fact, I haven’t seen any single company with as much complaints as this. We will tell you why in this review.

There are other survey companies that are a wee bit better like Opinion Outpost, Global Test Market and Inboxdollars, but whether they’re good or bad you’re still only earning peanuts when trying to make money with survey companies.

An interesting fact is that either the company itself or the many of its agents have been claiming that somebody is conning people their money through the use of iPoll.

This very fact is a red flag if you take into consideration the many complaints that have been filed regarding the firm’s own questionable practices.

It uses an iPhone app to recruit members who also happen to be quite new to the app world. It promises to get their members rich just by signing up.

The truth however is that even if you get complete a survey, getting paid is often very difficult and frustrating. It may sometimes take up to 2 months before you are paid and in worst case scenario, it won’t even come.

The reason for this is because the company can take up to 60 days before notifying you that the surveys you did are valid. Because the surveys generally pay too low, it will take a considerable period of time for you to accumulate $50.

This is the threshold needed before you can be paid, despite the fact that they state it as $15 on their site.

How Do You Make Money With iPoll?

iPoll claims on its site to pay members for every completed survey. But in most cases, it is through vouchers that are unusable at best. The pay is not just painfully little. It also takes eons for you to be paid.

Are you willing to wait up to 2 months to be paid $50 you earned? I doubt so. Just getting credited for a survey you completed takes ages.

Are There Any Issues With iPoll?

Do a search of your own, and you will agree that the complaints about iPoll are just mindboggling. They include the following:

There have been complaints of the company taking a whole two months just to tell you whether the survey that you took was actually a valid one.

Even if you manage to reach the minimum threshold, getting paid through PayPal is a completely different story. If you are lucky, you will receive the payment in your PayPal account after 4 weeks.

But if not, the wait can be more than two months. Don’t be surprised if you fail to get the payment completely.

At this speed, your children can even have children before you are able to make money enough to buy your grandchildren a Barbie. If you insist on making money by completing surveys, look for others.

There are many others with better and faster payment methods than iPoll. Their customer service, too, is seriously wanting.

What Are Others Saying Around The Web?

The comment below perhaps summarizes the general feel about this company.

“There are just way too much pending points. When you work, you want to be paid. With iPoll though, surveys tend to be in pending status way too long.

Most people take out surveys not out of something to do but because they want to earn rewards. This is terrible.”

This site is obviously not worth your time. You will not know whether the survey that you did was valid or not. And you are not even sure if you will be paid for the ones that you have completed.

It mirrors the general trend with paid online surveys. Even the best paying ones can’t pay you. In general, I would not recommend you to join any survey, let alone iPoll.com. Their pay is below is too little and cannot help you.

You can only use them for light spending but if you want work that pays your bill and puts food on the table, look elsewhere.

Do Not Waste Your Time With Cashback Research

Survey Say Review – Is It Legit Or A Scam?

Global Test Market Review – Is It A Scam Or Legit?