There are a lot of different opportunities available on the internet when it comes to making money online. There are hundreds or thousands of websites out there all offering various ways to earn.

Other opportunities will require more work on your part, like setting up a site and requiring you to promote it in order to make money.

Regardless of the opportunity, you come across, it is important to remember that not all of them are legitimate or are worth your time, effort, and money.

There are also a lot of opportunities out there that turn out to be a scam or a complete waste of time. To help you avoid these scams, we review these money-making opportunities to see what they offer.

Then we make recommendations on whether they’re worth trying out or not. In this review, we’ll look at a site called Million Dollar Replicator.

It’s a software program that claims to allow you to make money online. It’s creator claims that the program has already made a lot of people into millionaires.

But is the Million Dollar Replicator program really a legit opportunity to make money or is it just a scam to avoid?

Million Dollar Replicator is a program that is said to help you make millions online. It was started by a person who calls himself Michael Sachs.

Michael hired top mathematicians, statisticians, and programmers from all over the world to create this software. He hired them to create software capable of generating millions in profits for regular people without the need to do a lot of work.

He claims that this done-for-you software will help you get rid of your car payments, mortgage, and loans. He also claims that the software has made him and his beta testers millionaires.

Though this sounds enticing, I’d have to say that this opportunity actually seems like a big scam. Everything that is stated in the sales video is just one big lie to lure people into buying into their program.

There are actually several red flags that show Million Dollar Replicator is actually a scam and chief among them is that the identity of the site’s creator is a lie.

And this is not the only lie in the video since the testimonials from the so-called students of the program are also fake.

Another red flag is that Million Dollar Replicator hypes up its earning potential, which puts it in the get-rich-quick scheme category.

The site also lies about the supposed limited slots available to provide a sense of urgency. I’ll discuss all these issues in more detail as we progress further in this review of this opportunity.

The Million Dollar Replicator is supposedly designed for people who are looking for opportunities to make money online.

The site claims to provide a done-for-you software that can earn you millions in profits. Unfortunately, this is just a big lie.

The site is really just designed for the creators to lure people in to provide their details and money. The site doesn’t have a secret program or software that can earn you millions.

Their money-making program is just your typical get-rich-quick scheme that doesn’t really work. In the next section, I’ll discuss how this program supposedly works.

Why is Million Dollar Replicator Considered A Scam?

Million Dollar Replicator is advertised as a done-for-you software that is said to provide you with an opportunity to make money online.

It is said that the program has already generated millions of dollars to the people who have tried it out. You’re required to just pay a one-time fee of $37 (can go down to $17) to get access to it and start making your millions.

Sounds good? Well it’s too bad this is all just advertising tactics. None of what is stated on the sales video is really true, except probably the part of the money-making program.

Yes, Million Dollar Replicator is a money-making program, but it’s not the program that they advertise it to be.

You join, become an affiliate, advertise it, and then earn commissions. This is really all there is to this opportunity. There’s no secret formula or magical system, that you’ll get when you join.

Now it doesn’t sound like a system that can generate you millions of dollars, does it? Well, in reality, you really won’t make millions here.

Heck, you’d be lucky to even make a few bucks with this system. This is actually one of the red flags I have with Million Dollar Replicator, its overhyped income potential.

The sales video claims that you can generate a lot of money with their software and they even have testimonials from people who have supposedly earned that amount already.

Well, this is typical of a get-rich-quick scheme and we all know how those kinds of opportunities turn out and this one is no different.

Oh, and the testimonials you see, they’re all lies. Another red flag about Million Dollar Replicator is the site’s use of paid actors and stock photos for the testimonials of supposed members who already made money.

Do a quick search in sites like Fiverr and you’ll see a lot of these familiar faces who are offering to make these types of videos for a fee. 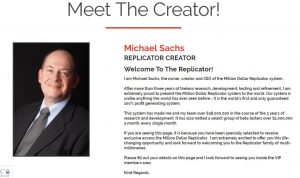 This goes the same for the pictures of people who provided testimonials. You’ll see all of them in sites that sell stock photos.

Yes, the supposed owner of this website is just a made-up character, which means the real identity of the owner of this site is hidden.

This is another red flag as the owner wouldn’t be afraid to hide his or her identity if the program he or she was offering was a legitimate one.

It’s only natural to hide your real identity if you’re trying to scam people so they won’t know who to blame or complain about.

Oh yeah, also, don’t believe their statement that there are only limited slots available. This is just a ploy to create a sense of urgency so you think that you need to sign up quickly before slots run out.

The real goal of the creator of Million Dollar Replicator is just to get your email address and your money. They need your email so they can send you tons of other similar opportunities to get more money from you.

As a member, you’ll also be bombarded with a lot of upsells, which can cost you a total of $750. That’s a lot of money, so it’s better to just avoid this opportunity completely.

Now that we know what Million Dollar Replicator is and what it offers, it’s time to discuss what I like about this opportunity.

What I Dislike about Million Dollar Replicator

When it comes to things that I didn’t like about Million Dollar Replicator, there are actually a lot of them. But I’ll just focus on the important ones.

Do I Recommend Million Dollar Replicator?

After learning more about Million Dollar Replicator and what it can really bring to the table, I would say that this is an opportunity that is not recommended. 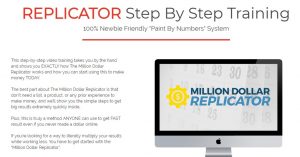 This site doesn’t offer any sort of value, let alone allow you to make millions of dollars. They don’t have secret software or groundbreaking program to reveal for their money-making opportunity.

When you join, you’ll have to promote this same opportunity in order to make money. And when you look at the entire thing as it is, you’d have to wonder, how would you even make money with it?

So don’t give in to the hype and colorful advertising gimmick that the creator put in their sales video. It’s all designed to entice you into believing it’s offering something worthwhile.

Stay away from Million Dollar Replicator, the creator’s real goal here is to just get your email address to send you more get-rich-quick schemes and to get your money.

There are a lot of better opportunities out there that can really provide you with a way to make decent money online.

Five Dollar Funnel Review – Is It A Scam or Legit

My Profit Formula Review: Legit Or A Scam?