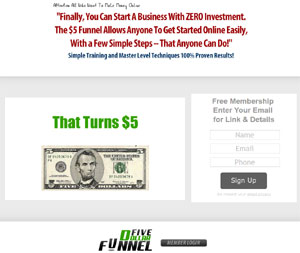 What is Five Dollar Funnel?

If you go to their signup page, it’s really difficult to understand what they’re selling, because there just not enough information to make heads of tail of the program, but with a little investigation you’ll find out that it’s nothing more than a MLM scheme that has info products as it’s primary product source.

It sort of reminds me of another MLM I reviewed where the more “skin” you had in the game the more you get paid. But sadly, this model can be a real pain in the ass if you’re just starting out.

In order for you to qualify for all of the payments at each level you will have to fork out around $400 per month recurring.

Some might argue that $4800 per year is nothing to spend getting a business started, but I’d argue that those costs are a minimum spend if you’re going to promote Five Dollar Funnel.

You will also have to learn how to market the business and also have a decent budget for advertising to get new leads.

Can you get started for $5?

Yes, you can, but the return is a joke, if you take into consideration the time, effort and money (for advertising) you have to put in to grow your business.

How Do You Make Money With Five Dollar Funnel?

You recruit people into the business and in return you earn a commission depending on what membership you have with the company.

The membership determines how much money you will potentially make.

Are There Any Issues With Five Dollar Funnel?

For those not in the know, an MLM business gives people incentives to “recruit” other people into a program, usually in exchange for financial rewards or discounts on the program’s exclusive products. You recruit people into a compensation matrix of sorts.

While the overall scheme itself is quite complicated to explain in just one paragraph alone, the workings of an MLM scheme can be condensed in a sentence: The more you recruit, the more you earn.

Now, not all MLMs are bad of course. The legitimate ones focus on the selling of products and not recruitment (which they usually offer just as an incentive for affiliates to sell more products). But the shadier MLMs focus entirely on recruitment and nothing more.

The products that they offer are useless- these are just as a front to make the whole scheme “legitimate” in the eye of the law. In reality, these shady MLM schemes are nothing more than mere Ponzi scams.

Let’s take a look at Five Dollar Funnel’s “compensation plan.” True to its name, you need to pay an initial five dollars entrance fee to join. You get the advertised learning materials as stated on the site, but as we’ve said, you can easily get these on the Internet for free.

Five dollars gives you three spots in a matrix to fill up.

Once you’ve filled this first level, each of the spots that you’ve filled can branch out into three more, resulting into nine overall matrix places.

This is level two. Each level that you fill gives you a compensation that starts out 25 cents per spot.

Everything seems innocent enough at this point, but once you get deeper into the matrix, you’ll find that it gets progressively harder to earn mere pennies from this scheme.

Five Dollar Funnel actually TAKES a huge chunk of your commissions away from each level.

For example, at level two, Five Dollar Funnel will charge you twenty dollars a month just to retain yourself at this level (this amount can be paid upfront or get taken out of your Level 1 earnings).

It’s basically impossible to earn anything from this scheme unless you’re a master recruiter who can recruit hundreds of people below you in just one go.

The general consensus among reviewers on the Web is negative.

Some (people who joined MLMs before) actually did try to make the Five Dollar Funnel plan work, but they found that the ridiculous amount that the site charges per level makes the money making possibility for this scheme close to nil.

It’s not even a good plan, if compared to other similar MLMs.

It seems that the site’s whole point is to scam people off of their five dollars with promises of learning how to become an online entrepreneur.

Sadly, this is not the case.

Most of the people who joined would later become disappointed with the fact that they entered a poorly conceived MLM scheme that is very shady at best.

If you want to learn how to become an online social media guru and marketer, then you can easily search for FREE resources around the web.

It’s also important to note that the founders of Five Dollar Funnel, Tom Cellie and Bill Ebert, were previously embroiled in other online Ponzi schemes (Bidify and Unlimited Profits).

That’s also a huge reason why you need to stay away from the site.

Bidify was modeled on Zeek Rewards, a site that garnered quite a negative public perception due to its Ponzi-like schemes.

But if you do want to try your hand out at MLMs, then remember than Five Dollar Funnel is definitely not one of the programs that you want to start your MLM career on.

You need to find a program with legitimate and in-demand products, and not the sort of products that Five Dollar Funnel peddles (which, we reiterate, can be easily had for free online).

A good MLM program will provide you with generous compensation for your recruits and not charge you with anything for staying on a particular level on a matrix.

These are everything that Five Dollar Funnel is not.