A lot of people dream of making money trading in the stock market. Raking in thousands in income after successfully predicting where a stock will go and execute a winning trade.

Unfortunately, only a handful of people succeed in making money trading in the stock market. The vast majority of the people who try either just break even, make a loss or even lose all of their money altogether.

Despite the overwhelming evidence that people are more likely to lose money than make money in stocks, this still doesn’t stop a lot of people from trying.

This relentless pursuit of income from trading stocks has also given rise to people who offer programs that can train you to properly trade stocks or recommends stocks for you to buy or sell.

He has several newsletters, including Profits Unlimited and True Momentum, which provides research advisory and recommendations on whether a certain stock is ripe for buying or selling.

The newsletters claim that it’s possible to achieve high return-on-investment (ROI) if the advice is followed.

But is Paul Mampilly really a legitimate expert on stock trading that you should listen to? Or is he just like a lot of the other scammers out there, only after people’s money?

Paul Mampilly is currently a senior editor at Banyan Hill Publishing, which is a research firm that provides information about asset protection, investing, and entrepreneurship.

He has an extensive trading and investing background with 28 years of trading experience. He started his career in 1991 as an assistant portfolio manager at Banker Trust.

He also managed multimillion-dollar accounts at Deutsche Bank and ING. Then Kinetics Asset Management hired him to be the main manager of their hedge fund.

In fact, Barron’s named the company as one of the “World’s Best” funds because it was able to average returns of 43% during Paul’s tenure.

He also got an award from Templeton Foundation after participating in a competition where he got a 76% return in just two years of investing $50 million. Oh, this was done in the year 2008 and 2009, during the global financial crisis.

This rise to fame led him to be featured and invited by Bloomberg TV, CNBC Fox, and Business News. A lot of Paul’s success in trading and investing was his foresight to believe in tech companies.

Some of the technology companies that he invested in before are very well known right now, like Netflix and Google.

Looking at Paul’s background in trading and investing stocks, you can clearly see that he is not just someone who is pretending to be knowledgeable in trading stocks.

He really knows what he is doing, so you’re assured that his recommendations are backed by research and experience.

Of course, this doesn’t stop people from calling Paul Mampilly a scammer, which is why this review is being written in the first place.

A lot of the scam rumors is due to the hyped-up claims of the sales page of his newsletters, particularly, the popular Unlimited Profits.

Then there are also comments from people who have followed his recommendations but only ended up losing money.

I’ll discuss these issues and complaints in more detail as we progress further in this review about Paul Mampilly.

Who is Paul Mampilly’s Target Market?

The products and services that Paul Mampilly offers are designed for everyone who wants to learn about trading and investing in the stock market.

His newsletters are designed for all types of investors, beginners, the experienced, and the more seasoned professionals.

The most popular newsletter is Unlimited Profits and it is also the one that Paul recommends the most. It is also considered as the most balanced one as the strategies taught here are not aggressive or conservative.

It is important to note, though, that Paul’s newsletters are not available for free. You’ll need to subscribe and pay an annual membership fee.

In the next section, I’ll discuss briefly the different newsletters that Paul offers and how much it is to subscribe to them. I’ll also talk about the reasons why some people say he is a scammer.

What Does Paul Mampilly Offer?

As mentioned above, Paul Mampilly offers newsletters about trading on the stock market. He actually offers 5 newsletters that you can subscribe to.

The first of these newsletters is the True Momentum, where Paul will teach you how to achieve 100% gains with only a moderate level of risk.

He also has the Extreme Fortunes Stock Investment which shares the strategy of identifying 43 stocks that will allow you to achieve a gain of 1,000% or higher in a year.

The third newsletter is the Rapid Profit Trader, which provides a system that takes out the emotional element in investing stocks.

The fourth newsletter is the $10 Million Portfolio where he will show you how you can find assets that have enormous growth potential.

The four newsletters mentioned above are all good, but his most popular one is the Unlimited Profits. In this newsletter, Paul provides you low-risk investment recommendations that he says is poised to explode higher.

This newsletter focuses on stocks that concentrate on two trends, the Internet of Things and millennials.

The reason this is popular is that it is the newsletter that is perfect for all types of traders and investors, from beginners, experienced, and the seasoned pro. It is also the cheapest newsletter.

Paul charges an annual subscription fee for all of his newsletters. Some of them will cost you thousands a year. The standard subscription to Unlimited Profits is available for only $47 a year. This is why a lot of people prefer this newsletter compared to others.

What People are Saying about Paul Mampilly?

People’s perception of Paul Mampilly is actually mixed, as there are some who says that he is a genius and a guru trader that helped them make money in the stock market.

Others call him a scammer who only made money through the subscription of his newsletters and not through the stock market. 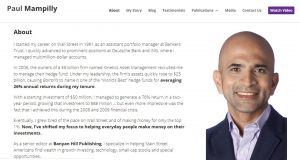 I think it’s not right to call Paul Mampilly a scammer as his profile and background shows that he is an experienced and knowledgeable stock trader and investor.

So he is not just a person who is lying or pretending to be an expert in stock trading, because he definitely has the credentials for it.

However, I do question how the Banyan Hill Publishing markets the newsletters that Paul offers. One of the reasons why a lot of people call him a scammer is because of the hyped-up gains that you can make on the stock market.

I don’t doubt, that it is possible to achieve 300% or even 1,000% gains on the stock market. If things align your way, you’ll likely achieve that kind of gain.

But that’s the thing, there’s really no assurance that everything will go according to your plan or strategy. No one can really control or accurately predict what direction the market will go.

The best you can do is just have several signals or indicators go according to your plan so your chances of predicting correctly increases. But thinking that it will always go 100% your way is just wrong.

The guarantees provided on the sales page aren’t helping as this increases people’s belief that the strategy will work 100% of the time.

But as mentioned above, there’s no guarantee in the stock market. You can’t expect to be right all the time. You have to accept that there will be trades that will not go your way.

So instead of holding on to a losing trade, you can quickly cut your losses before you lose all the money in your trading account.

I did see a review that says if you follow all of Paul Mampilly’s recommendations when he started the newsletter in 2016, you’ll have more winning trades than losing ones.

This at least shows that the majority of Paul’s recommendations are right. If you followed them all, then you would have won more than you lost.

But if you were selective in what you followed, then it’s a 50-50 chance that you could win or lose in a trade.

To be fair, Paul does reiterate that what he offers is not a crystal ball that predicts the future. There will still be risks involved in trading or investing in the market. But the hype and guarantees made likely overshadows this reminder for some people.

Now that we know who Paul Mampilly is and what he is offering, it’s time to discuss what I like about this stock trader and investor.

What I Dislike about Paul Mampilly

Of course, there are also things about Paul Mampilly that I don’t really like, which I’ll discuss here.

Is Paul Mampilly Legit and are His Products to Be Recommended?

After learning more about who Paul Mampilly is and the products that he offers, I can say that he is not a scammer. 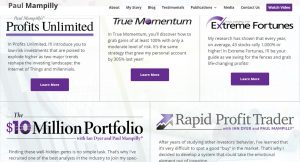 Paul’s background and achievements make him a legit source of knowledge and information when it comes to trading or investing in the stock market.

As for recommending his products, I say it is worth checking out, especially the Unlimited Profits newsletter. I believe he provides good knowledge and information, especially for newbies.

But I will stress that trading and investing in the stock market will have risks involved. No matter what Paul says or what guarantee he provides, there’s no way you will always win in the market.

You should expect to lose some of the trades that he recommends. This is why I advise you only invest with money that you are comfortable losing, like excess cash you’re not going to use for your regular expenses.

In this way, if things don’t go your way, losing the money won’t hurt as much.