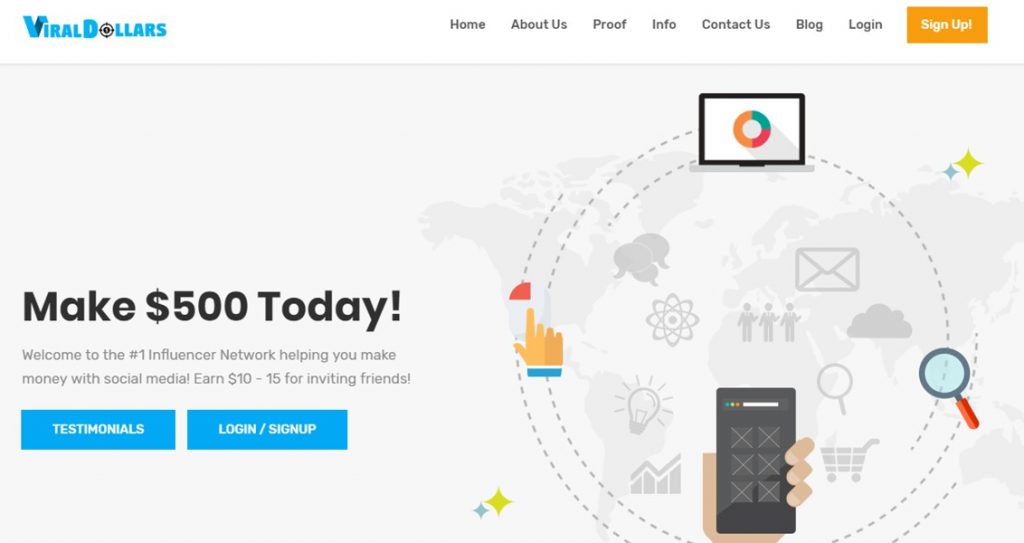 You will actually find hundreds or even thousands of different opportunities on the internet when it comes to making money online.

And this trend is expected to continue or even increase because there are always new sites being formed daily that offers opportunities to earn money.

But with so many opportunities available, it is actually a challenge to find the right opportunity to join. This is because not all of the money-making sites you see are legit.

There are actually a lot of scams out there that are only after your information or your hard-earned money.

Then, there are also legit sites that are worthless because the money you can earn is not worth the time and effort you need to put in.

To help you avoid the opportunities that are a scam or a waste of time, we review money-making sites and recommend the ones that are worth trying out.

For this review, we’ll look at a site called Viral Dollars, which used to be called Viral Pay. This site claims to offer an opportunity to make money through your social media networks.

But is Viral Dollars really legit? Or is it just another scam that you should avoid?

Viral Dollars calls themselves an Influencer Network that can help avid social media users to turn their usage into money.

Basically, the site just provides people an opportunity to make money online doing various tasks on the site like referring people, getting clicks on a link, and so on.

Based on my impression with Viral Dollars, I don’t really view them as a site that offers a legit opportunity to make money.

Looking at the opportunity they offer, I wouldn’t call this site an Influencer Network as their site doesn’t provide anything related to that.

This is already a bad sign as what they offer is not reflective of what they claim to be. This is not the only red flag that I see about Viral Dollars.

You can also add to this the fact that they’re just a rebrand of the popular Viral Pay, which earned scam status because the site stopped paying.

Viral Dollars also make use of fake testimonials to look legit and the owner or developer of this site is an unknown.

I’ll discuss these red flags, as well as others, in more detail as we progress further in this review of Viral Dollars.

If you believe what Viral Dollars is saying, they’re basically designed for people who spend a lot of time on social media sites and apps.

They say they provide a way to monetize people’s social media usage since they claim to be an Influencer Network.

In reality, though, they’re not really an Influencer Network. Sure, they provide an opportunity for you to make money through your social media usage, but it’s not by turning you into an influencer.

You’ll basically make money referring people and getting them to click on a link. But since this is a rebrand of a site that was labeled as a scam already, there’s a possibility you won’t get paid here as well. 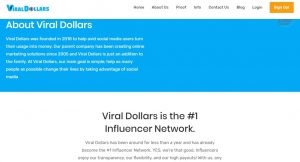 In the next section, I’ll discuss the different red flags showing signs that Viral Dollars is a scam.

Why Viral Dollars is Not a Legit Opportunity?

Viral Dollars is a site that claims to provide an opportunity to make money through your usage of social media.

Well, they’re not really lying in that regard since two of the money-making opportunities they provide is referring people to join the site and making them click your referral link.

You get to earn $10 for every referral and $2 for every click. Aside from these two, you can also earn $10 downloading apps that the site recommends and $25 for answering surveys.

The last way you can earn on this site is by subscribing to the YouTube channel of the site and creating your own Viral Dollars YouTube video and promoting them. You get to earn $50 if you complete this task. The title of the video, description, and even tags will be provided.

This all might sound cool and legit, but as mentioned above, Viral Dollars doesn’t seem to be a legit opportunity and I’ll tell you why.

Let’s start first with the earnings. Before you’re able to withdraw the money you earn, you need to meet certain requirements first.

You’ll need at least 20 clicks, 5 referrals, and complete at least 4 task wall tasks. Once you meet the requirements, you’re supposedly able to request your payment.

It seems you need to wait 30 days before you can get your money, but if this site is really just a rebrand of Viral Pay, then there’s a big possibility you won’t get anything.

A lot of the complaints about Viral Pay is their refusal to pay members, they usually disapprove payments so members don’t get anything.

I did see a few people saying they got their money from Viral Dollars but I’m questioning the legitimacy of their statement. The dates just don’t add up.

One posted the review about Viral Dollars on March 17, 2019, and mentioned she got paid after the 30-day waiting period. The problem is that the day of the payment was supposed to be March 29, 2019. Either she can see into the future or she is lying about being paid at all.

Aside from not likely getting your money, another issue I saw is that Viral Dollars claims to be an Influencer Network, which is a big lie.

They even use logos of known brands to make the site look legit but these logos can easily be added and the site has never worked with them.

Another red flag is the fake video testimonials. The site provides testimonials from so-called members to show the legitimacy of the opportunities. But if you do a quick search, you’ll see that the people in the videos are paid, actors. These actors can be found on Fiverr, who will do these videos for $5.

The identity of the site’s owner is also not given, which is not a good sign. If the opportunity was really legit, the owner wouldn’t be afraid to reveal themselves as he or she would be confident with their product.

Sadly, this is another tactic that scammers use. Hide the site’s identity or use a fake one. I also question the Viral Dollars’ claim that they were founded in 2018.

If you search how old the site is, you can see that it is barely 1 month old, as of this writing. Maybe the scam was established in 2018 since there were already similar sites before this one, including Viral Pay.

Speaking of Viral Pay, if you check the image below, you’ll see that the owner somehow forgot to edit the content of their FAQs page since it still mentions Viral Pay instead of Viral Dollars.

After learning more about Viral Dollars and what they offer, it’s time to discuss what I like about this opportunity.

When it comes to the things that I didn’t like about Viral Dollars, there are a lot of them. But I’ll focus only the important ones that you need to know.

Do I Recommend Viral Dollars?

After learning more about Viral Dollars and what it can really bring, I would say that this is one opportunity that I don’t recommend.

I don’t consider this site legitimate.  It has a lot of red flags that point to it being a scam and chief among them is the use of fake testimonials, lying about how old the site is, and no proof yet that they really pay. 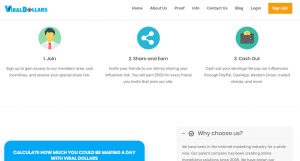 There’s also the fact that Viral Dollars is a rebranding of Viral Pay, a once popular site that was labeled a scam as it stopped paying its members.

I believe what these sites really do is steal your information, your name, and your email, then sell them to individuals or businesses that are willing to buy them.

They make it seem like the site is legit so a few lucky ones will be paid at the start. After that, the site would just go dark and then reemerge with a new name, but similar to everything else.

This is why you should just stay away from Viral Dollars and don’t believe any of the hype that surrounds it. Not only will you waste your time, but you will also put your information at risk.

Commission Jailbreak by Travis Stephenson is a Scam: Be Careful

A Kalatu Blogging Review – Is It A Legit Blogging Platform Or Scam?