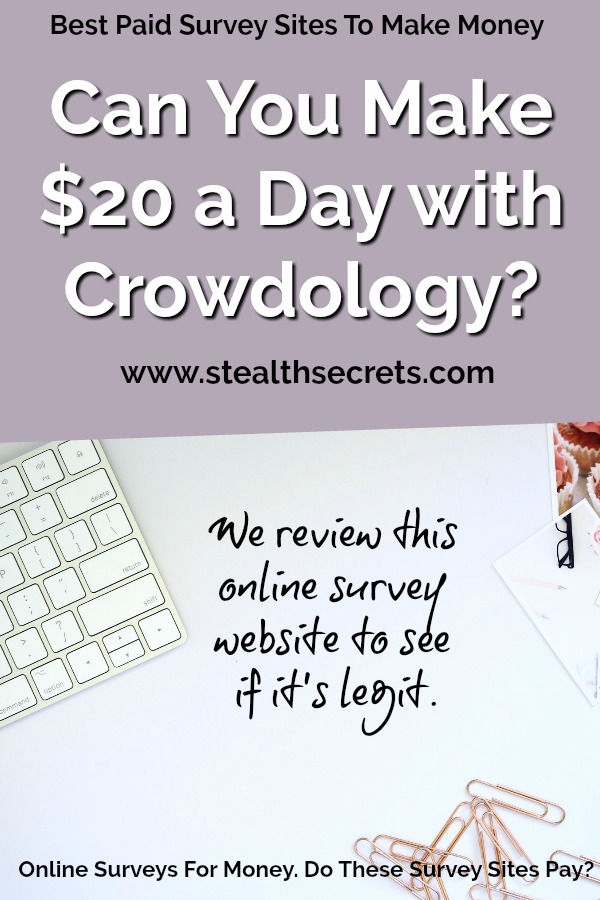 There are a lot of survey sites out there that offer to pay just for answering their surveys. They will pay in either cash or points that can be redeemed for rewards.

The problem here is that a lot of the survey sites out there are either a scam, where you won’t get paid anything at all, or just a waste of time and effort because the money you will earn is very small.

This is why it is important that you make sure the survey site you will be joining is a legitimate one that pays and the pay you will get is worth your time and effort.

For this review, we’ll be talking about the Crowdology survey site. It is a website that will pay you in cash for answering surveys.

Once you reach the minimum required amount, you will be able to withdraw your money via PayPal. There are some people who claim that the site can allow them to earn about $20 to $30 a month.

That seems like a decent amount just for answering surveys, but is it really a legit opportunity or just a scam and a waste of time?

Crowdology Seems Like a Legitimate Opportunity, But there are Some Issues

Crowdology is an online panel that offers paid surveys to its members. The surveys they provide come from brands, businesses, organizations, and so on that are looking to gather information and opinion.

You will get paid for every survey you are able to complete. Once you have reached the minimum cash out requirement, you can withdraw your money via PayPal.

From what I’ve seen so far, it seems like Crowdology is a legitimate opportunity that will really pay you for completing surveys.

There doesn’t seem to be a lot of problems when it comes to getting paid. But there are some issues with delays in payment.

There have also been a lot of complaints about the site freezing accounts, deducting earned money, and so on. But I believe a lot of those issues is due to the site’s terms and conditions not being followed.

Another issue with this site, which is actually an issue with most survey sites, is that there are not enough surveys. As for the $20 to $30 a month earning, I’ll be discussing it further as we progress in this review.

To Whom is Crowdology Made For?

The Crowdolgy website is made for two groups, with one group being businesses, brands, organizations, and so on that are looking for more information that can help improve their respective businesses.

The other group are people like you who are looking for ways to make some money online. For brands and businesses, the company offers ways for them gather information from a variety of people.

They do this by conducting survey questions to their diverse population of panelists. For people like you,  Crowdology offers an opportunity to make money answering surveys.

You will get paid for answering the surveys that the site will send you. The kind of surveys you will get will be based on your profile.

Once you have earned enough money, you can withdraw it via PayPal. In the next section, I’ll be providing more details as to how you will make money with Crowdology.

How Do You Earn Money with Crowdology?

When it comes to making money, Crowdology offers only one way to do it, and that is by completing the surveys they provide.

You will be paid for each survey that you complete. Once you have reached the minimum cash out requirement, you can request for a withdrawal and you will get your money via PayPal.

Now, the first thing that you would need to do is to sign up to become a member of Crowdology. It is free and easy to do so. You will just need a valid email address that you will need to verify it.

You also have to be at least 18 years old and a resident of the U.S. or UK to be able to sign up. Once you have registered and verified your email, you can start answering surveys that you get invited to.

It is important first to complete your profile, so the site can send you surveys that are based on your personal information and demographics.

Now as mentioned above, a lot of the members complain that they don’t get a lot of surveys to answer. Some say they only get 2 to 3 a month, while others even less than that.

Crowdology says that they don’t want to invite people to surveys that they are unlikely to qualify for, which is why they don’t have a lot of survey invites.

The site actually claims that their disqualification rate is very low. However, not everyone agrees with it since there are still a lot of people who experience more disqualifications than being able to answer surveys.

As for the earnings, Crowdology pays $0.40 to $10 per survey. The money you earn will be sent to your Crowdology account and you can withdraw it via PayPal or redeem it for an Amazon gift card. 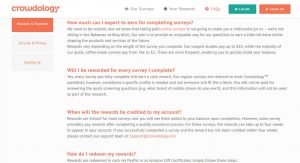 The site also says that it will only take you about 5 to 10 minutes to complete a survey. As for what people actually experience, the payment is legit, as the site really does pay what they say.

There are some complaints about money being taken off peoples account, but this only happens when a wrong answer was given.

I’ve also seen complaints about accounts being blocked or payments taking a while before they are credited to a PayPal account.

But there are also a lot of good comments about the site, so you know it’s not all that bad. From what I see, it’s probably important that you are properly aware of the site’s Terms and Conditions to avoid problems.

What is Good about Crowdology

Now that we have learned more about what Crowdology is and what they are offering, it’s time to discuss what is good about this opportunity.

What is Bad about Crowdology

Of course, there are also things that I didn’t like about Crowdology, which I’ll discuss here.

Based on what I’ve seen and heard about Crowdology, I’m saying it’s an opportunity that is worth checking out if you live in the U.S. or UK.

I can’t recommend them fully since it is hard to ignore a lot of the recent complaints that people have, especially when it comes to delayed payments or the site not crediting completed surveys. 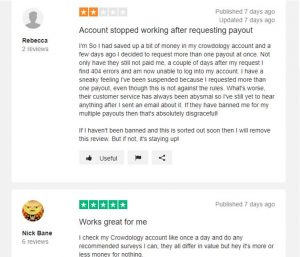 I’m also not a fan of the low number of surveys that Crowdology provides, something that even those who have good things to say about the site mentioned in their comments.

But recognize its legitimacy and the good things that other people are saying. This is why I say you can still check it out and see if it is something that you would like to consider.

Just don’t expect to earn a lot of money with this site. The person who claimed to earn $25 a month with Crowdology, likely just experienced it once.

I don’t really see how you will be able to reach that amount with this site consistently. It is more likely that you will earn $10 a month, at most, with this site.