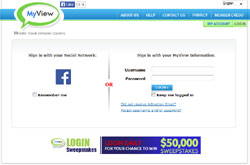 MyView, based out of New York and located at myview.com, refers to a paid survey website owned by Authentic Response research marketing company.

Eligibility criteria include being aged at least 13 years to take part in the surveys as well as participate in testing of products.

For the time that you take doing the surveys you will be rewarded through points that are redeemable for PayPal cash, charity donations and gift cards among other things.

This is similar to another program that I review here called Opinion Outpost.

This site offers compensation via gift cards as well as cash when you fill out the proffered surveys. You may be asked about your opinions regarding a number of stuffs like gadgets for IT gurus, cutting-edge tools, due to be released movie trailers, business topics and unreleased video games among other things.

The gift certificate or cash reward that you get can be used to purchase stuffs on the internet. But this cash is not able to pay your bills. It is just some spending cash that you can use to buy a few things.

This means that you should not join it hoping to make a decent income to support you and your family. Some paid survey sites are even misleading, telling members that they can replace their day jobs with online surveys.

This is utter garbage. Even if you find genuine ones like My View which don’t charge you any upfront fees, it is still worth noting that what they pay is actually too little and cannot sustain you.

What Are The Issues With My View?

• It takes long to be credited for the survey you completed

After completing the survey, you will have to wait another couple of months before you get credited for it. What they do is issue users with confirmation code after every finished survey.

This code should be stored for records purposes and you can also use it to confirm if payment for that survey has been sent.

That and it takes a couple of months before you are credited for a completed survey. They issue you a conformation code at the end of each finished survey to keep for your records and check earnings in your account.

• Too many surveys are for sweepstake entries

Nearly 50% of the completed surveys will go for sweepstake entries. And for the ones that pay, they are worth between $.50 and a few dollars. If you do not qualify, a survey will take you roughly 15 minutes but a full one takes about 30 minutes to finish.

When you are compensated through gift cards, you can expect that it will take some time before it is ready to cash. Also, it takes quite a long time to receive the gift cards. Sometimes, they just don’t work.

Others also complain never receiving confirmation codes even after they have completed surveys.

The only good thing with My View is that, unlike many companies, they at least give you 100 points for the surveys that you start but can’t finish because you are ineligible.

While this is only pennies, it will count eventually because you are not likely to qualify for majority of surveys that they send you.

“These people are just like other surveys out there. On the large part they will reward you with points which you may redeem for PayPal cash. But I have read people complaining that they had their accounts closed abruptly and without notice.

I would not recommend you to try it out as they are not reliable.”

Although there are a few complaints about the company, it is not half as bad as many other companies that I have reviewed. But if you are looking for steady cash flow from the web, I would not recommend you to work with this firm.

What they pay is peanuts and can’t really sustain you. You will need to work for several months to make any significant income.

I would urge you to look into other more pragmatic methods of making money online like internet marketing through Google AdSense and even freelancing. But this site I do not recommend?

MyPoints Review: Is This Daily Rewards Program Worth It?