Cryptocurrency is taking the world by storm, especially after the most popular cryptocurrency in the market, Bitcoin, exploded in value towards the end of 2017.

Now a lot of people are trying to recreate that magic, looking for the next cryptocurrency that will also explode in value and make people millionaires.

Unfortunately, this demand for the next Bitcoin has also given rise to a lot of scam opportunities trying to take advantage of people’s thirst for the next big thing.

A lot of these scams portray themselves as the next big thing in cryptocurrency and promises that their value will skyrocket once it is launched.

Of course, not all are scams, as some have experienced some sort of success along the way. But trying to be the next Bitcoin seems to be an impossible task for now, but that doesn’t stop people from searching.

One cryptocurrency that I will talk about in this review is called The Billion Coin (TBC). This cryptocurrency, though, is a bit different from the others as the developers plan to keep it private.

They said that its value will not be determined by the market, but by a software that will drive the price of TBC up until it reaches its Ultimate Price.

The amount of money you can earn will be determined by the so-called value of the coin. But is this a legitimate cryptocurrency or just a scam like the rest?

TBC identifies itself as a community of cryptocurrency investors and is a private group, which means their currency is centralized and not reliant on the volatility of the market.

The company boasts that the value of the TBC is rising 1% to 5% daily, using a software program to drive these gains. They say that becoming a member is free, but you will need to pay a one-time fee of $10.

The fee is for the TBC wallet, where the TBC you bought will be placed. Unfortunately, if you are looking to invest in this cryptocurrency and hoping that it is the next big thing, well just keep on hoping.

The TBC site has already been proven as a scam by a lot of reviewers and people. The website itself already contains a lot of red flags and warning signs that they are a scam.

But if you want to know more why TBC is a scam, then you”d better read on, as I will discuss more in detail the reasons why this opportunity is a scam and why you should avoid it.

Who is The Billion Coin Made For?

The Billion Coin is an opportunity that is designed for people who are looking for the next big cryptocurrency that can make them rich.

They are basically for people who either missed the Bitcoin train or are on the lookout for a similar opportunity to make some money again with cryptocurrency.

The coin promises interest rates of up to 5% daily and you don’t have to worry about the value of TBC going down since it’s not affected by the volatility of the market.

The company said they use a software program that can guarantee driving the value of the coin up daily until it reaches the Ultimate Price.

Unfortunately, your investment won”t really earn any of that Ultimate Price that the company is boasting about, as you will never really earn anything here.

The site is basically just a Ponzi scheme, and like a lot of scam sites these days will only pay you at the start and will refrain from paying once you believe its legit and invest more money.

In the next section, we’ll discuss more in detail why this opportunity is just a scam.

How Do You Make Money with The Billion Coin and Why it’s a Scam?

To understand why The Billion Coin is a scam, it is first important to discuss how you can make money with TBC.

Now, TBC only provides one opportunity to make money and that is through investing in their coin. The company boasts that their coin will never decrease in value and will continue to go up until it reaches the Ultimate Price.

The site says that the Ultimate Price for TBC is basically one Euro that is multiplied by the total number of verified and paid members within the community.

The company has yet to provide any new updates about the current price of the TBC. Joining is free, but you will need to pay $10 as Wallet fee, which is also currently inactive.

If you think about it for a moment what TBC offers, you will see that there are a lot of problems with it. For one, how can the company protect the value of TBC from market fluctuations?

No software available in the world right now can do that so how do they do it? Oh, the coin is private and centralized, meaning they get to control everything.

Ok, so the current value set then is not the actual reflection of the market, but that of what the developers are setting. 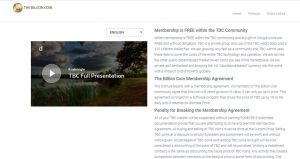 So it means it’s really worthless since this is only dictated by the owners and not the actual market. This shows that the company is outright lying about the value of TBC since they are the ones who just set it.

If you are familiar with how the exchange market works, you know that the value of a cryptocurrency is subject to market fluctuations. It’s always a battle between the buyers and the sellers.

Another sign that it is a scam is that TBC is not really available on the Coin Market Cap or the World Coin Index, which means there really is no coin existing anywhere other than the TBC website.

So, again, where did they derive the coin’s value from? Lastly, there is no information listed on the website about the owners or developers of the coin.

This is one of the clear signs that it is a scam, as a legit company is required to provide legitimate information and details about the owner or developer.

If you check out the TBC website, you can also see that their supposed Wallet is already inactive. This means the site is already close to shutting down, as their real intention has already been revealed.

What is Good about The Billion Coin

Now that we know more about The Billion Coin, let’s discuss if there are good things about the opportunity they offer.

What is Bad about The Billion Coin

When it comes to the bad thing, there are actually a lot of them, but I’ll discuss the things that you would only need to know about them.

Do I Recommend The Billion Coin?

Of course, the answer to this is a big NO since the opportunity they are providing is just a waste of your time and money.

No matter what the company says and how much you hope they are real, you will just end up losing money here if you somehow believe their lies and invest in TBC.

All of the promises of the TBC, including its perceived value, are all a big lie. For one the value is not reflective of what the market is saying but more of what the developers want to project.

Another thing is that there is no coin existing outside of TBC, so it really doesn’t make sense how they are generating daily returns for the coin.

If you encounter this site, it’s best that you stay away from it and avoid even signing up, as you will already lose $10 just for doing that.

1 thought on “The Billion Coin Review: Legit Crypto Or Scam?”