Welcome to my 3rd party review of MOBE!!!

By now, you may have seen other reviews that I have done but if this is your first time here, you should be glad that you are conducting research before joining an MLM.

Believe it or not, people hear about a “great opportunity” and jump in head first.

This is a big mistake and you should always make sure that a company is legit rather than based on nothing but hype.

There are many ways that you can do that but my reviews provide a quick and easy way of looking at the company from all vantage points.

I start out with a brief background check of the company and tell you what MOBE will not.

You see, they make it seem like everything is right as rain, but 99% of the time, it is not.

Then I talk about the compensation plan and Income Disclosure Statement, if available.

You need to know if you can make money selling the products or recruiting other members.

Then I explain how the Better Business Bureau provides priceless information including testimonies and reviews, followed by a list of things to be worried about.

The last section of the review is my final verdict which sounds like a recommendation but it is not.

I tell you what I would do because ultimately, the decision is yours, all I am trying to show you what to expect from the MLM if you do become a member.

The best thing about my reviews is that they are completely 3rd party which means I have ZERO affiliation with the companies I review.

Therefore, you do not have to worry about bias or sales pitches.

MOLE Overview – What is the Company?

The first part of this section is information directly from the MOBE website, which is what the company wants you to know.

An Australian man named Matt Lloyd founded MOBE in 2011 and made his first $1 million by the age of 25.

What is even more crazy than being a millionaire at an early age, is he did it as a college drop out.

The introduction to Matt Lloyd also says that he travels around the world for a good chunk of time each year while making millions.

In the process, MOBE has made active students around $35 million and has set a goal to reach the $100 million mark by the end of 2016.

WOW, this is all great info and it seems that there are clear and helpful intensions to help people out.

On the other hand, there are some things that you should know about the company via the information provided by their own website.

For example, if look at the massive number of subscribers (750k) and divide by the number of active affiliates (12k) you get a rather jaw dropping revelation; 1.6% of all people that involved with MOBE on any level have a chance to make money via the compensation plan.

That is the craziest thing I have ever heard in regards to MLM. Here is a comment that puts things into perspective.

You see, MOBE wants you to think there are only two sides of the coin.

You are either a supporter of the MOBE system because you are affiliated with them, or you are against them because you were not one of the lucky members that made money. 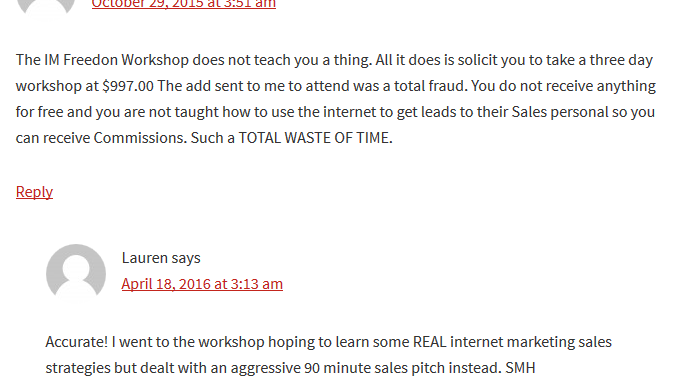 Although there is some truth to the comment above and the “two sides of the coin” theory, it doesn’t paint the entire picture.

You see, there are some people that realize exactly what these kinds of companies are; legal pyramid schemes.

More on this in the compensation plan section, stay tuned.

Let’s look at the products and services of MOBE.

Related: MyEcon Review : Is It A Legit Business Or A Scam?

This is going to be a long list so I will just keep it as simple as possible so that you don’t spend an hour going through them.

Keep in mind that you can see the entire list on the compensation plan pdf located in the section below.

I did not include all of the event prices and services because the list would be really long.

I strongly recommend that you read the entire product list directly from the MOBE website or compensation plan because there are so many overpriced products that are a complete waste of your time and money.

This comment points out that a very educated affiliate was scammed and was ignored by her mentor after she stated that she couldn’t afford an upgrade.

What kind of company does this or condones this kind of behavior.

Obviously this is not a one-time thing because the prices have drastically increased over the past few years.

This is due to the fact that registrations are way down and people are starting to catch on to their shady program.

They compensate the losses in memberships by drastically increasing prices.

Anyway, let’s take a look at the compensation plan.

This is another short section where I will simply provide you the meat and potatoes of the operation.

I think a short list of ways to get paid is a better option than a crappy video that I can’t endorse or a complete breakdown.

I think it is imperative for you to check out the plan on your own time so that you can familiarize yourself with the fine print.

Trust me, if you join ANY MLM, you will need to know exactly how to take advantage of the plan, it at all possible.

Below are two links that will be most beneficial to you.

I will be breaking some of the content down but please read both in their entirety.

Scroll down to the first chart and see the magic that is MOBE.

Remember the 1.6% of all people affiliated with the company that have a chance at making money via the compensation plan?

Well this document provides some alarming stats; like the fact that 55% of the 1.6% make less than $100 per month.

Come on, how is this even legal?

There are so few ways to get compensated and one of them is a car program that only a select few people have a chance to get.

Granted you get a pretty good chunk of change for recruiting a new member, the odds are never in your favor.

There is no way that you can market a program that costs upwards of $30k when you can get training programs for free on YouTube.

I have seen a few other MLM training programs like this and they are really hard to get behind because very few people are willing to join.

Let’s take a look at the BBB information now. 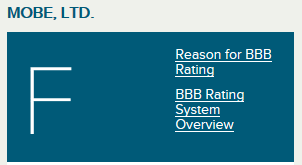 As you can see, the BBB has given MOBE an F grade.

This means that there are several issues with the company.

They most likely do not comply with customer satisfaction regulations and also don’t have an adequate money back guarantee.

These are huge problems that need to be addressed but I have a feeling that there is no turning back for MOBE.

I have a feeling they will not be in business for very much longer or are simply waiting out the storm so they can create their next scam that simply has a different name but offers the same crappy services.

Let’s take a look at the complaints that are from the BBB website. 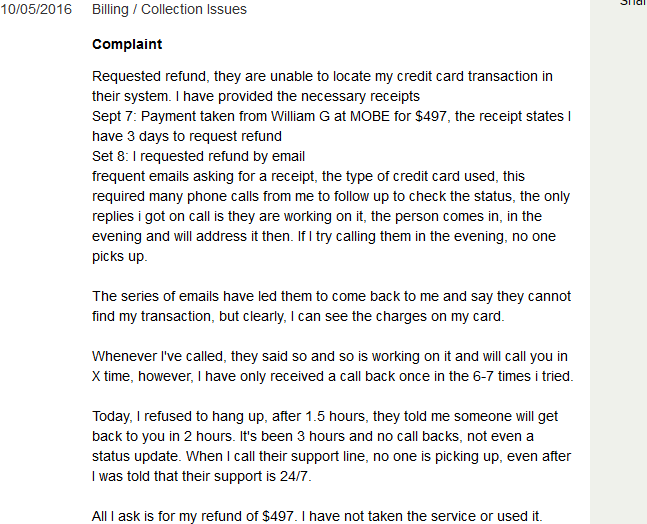 This complaint is very common and there is a reason for it.

People are told that they will make huge gains if they stick to the plan and blah blah blah.

I’m tired of people getting scammed by companies pretending to be something they are not.

I mean, how can they charge people for programs and then not comply to their own rules and regulations.

I think it is embarrassing for a company that is supposed to be top of the line and it treats its customers like trash.

There is so much more I want to say on the matter but I will try and stay as professional as possible.

Here is a quick list of things that you need to be wary of in regards to MOBE.

I picked some of the most prominent reasons you should turn around and run as fast as you can.

Unless you are a world class recruiter that can shove $30k training programs down people’s throats, you have ZERO chance at making this program work…ZERO.

Expensive: As I have said on multiple occasions throughout the review, the programs are so expensive.

Think about this for a second, at least from a global economy standpoint.

The vast majority of people in the world are poor.

Then come the middle class and they are living paycheck to paycheck at the moment and that is if they are lucky enough to have a job.

That right there should make you realize that you will not be able to recruit people.

Well, not in all countries but in most countries, like Canada for example. 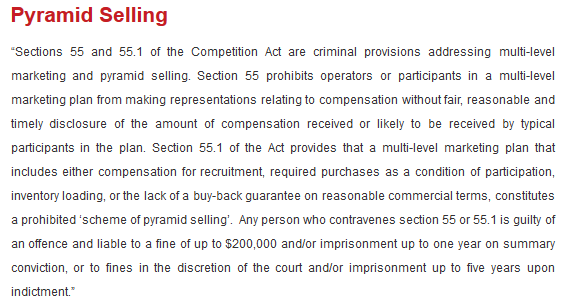 Here is a quote from the Canadian Advertising Law article:” Section 55.1 of the Act provides that a multi-level marketing plan that includes either compensation for recruitment, required purchases as a condition of participation, inventory loading, or the lack of a buy-back guarantee on reasonable commercial terms, constitutes a prohibited ‘scheme of pyramid selling’.”

All of the criteria is met and if you look at the Money Back Guarantee, “MOBE offers a thirty-day, money back guarantee on certain products,” you can bet that the upgrades that cost thousands of dollars are nonrefundable.

Recruiting: Recruitment for compensation is such an archaic way of making money online.

I have an idea; how about a MLM or Direct Selling company create a legit system that actually works for anyone interested.

That would require the company to purely focus on product sales and limit the focus on recruiting.

This is why training programs have such a unique opportunity to reshape the image of MLMs.

Drop the recruitment program and have 1 or 2 upgrades at most and drop the price by nearly 97% and MOBE might be on to something.

OK, I have been really hard on MOBE and for good reason.

In countries like Canada, which have strict laws against MLMs, this company could not exist.

Unfortunately, not all countries protect their citizens from such things.

I mean, he USA has a Direct Selling Caucus in its government body that protects MLMs instead of regulating them.

At any rate, in some countries, MOBE is a scam, but in others, it is a legalized pyramid scheme.

So if I were you, I would check what your country defines a pyramid scheme as and see if MOBE legal.

To all of my readers, there are other ways to make money and you should look for one of those ways.

If you want an example of one, check out this review.

There is ZERO risk involved because you can give it a try for FREE.

There is also no recruiting involved and you get some great ideas on how to start your own online business.

No more requirements and no more scams to worry about.

I hope I helped you on your journey to financial independence.

If you have any experience with MOBE, would like to ask a question or leave a comment, feel free to fill out the form below.