Welcome to my 3rd party review of Modere!

There is going to be a lot of information that you need to digest before making a really important decision.

You see, most people blindly join MLMs and hope for the best and that is a mistake.

MLMs are not a get rich quick scheme and if you knew all of the statistics about MLMs in general you would probably stop reading this review and look for another line of work entirely.

What MLMs won’t tell you is that you have a depressingly low percentage of actually making money.

The last review I did, MOBE, only had 1.6% active members and only 55% of those people made money.

I am not trying to scare you away from MLMs, I mean some very skilled individuals make it work because they have years of experience with generating leads and recruiting.

On the other hand, if you are new to the business or simply are looking for something that you can hit the ground running, you are in for a rude awakening.

After doing hours of research, I have compiled a lot of evidence that Modere is no different than 99% of other MLMs.

You will be required to recruit other members and get compensated for it because you cannot earn a decent living by selling the product alone.

In this review you will get a brief overview of Modere leadership and history.

Then you will get to see the product line, or at least some of it.

Then I will discuss the compensation plan and provide you with the PDF so you can get familiar with the fine print; trust me, you will thank me later.

I usually provide you with the Better Business Bureau (BBB) analysis but unfortunately, I could not find a listing.

I will, however, provide you with a list of things to be wary of before joining Modere.

The last section is my verdict of Modere where you will not get a recommendation.

I will never recommend a MLM to you because I do not believe in their business model.

One last note; I have absolutely no affiliation with any company I review so you don’t have to worry about bias or sales pitches.

Modere Overview – What is the Company?

Modere is an MLM in the Personal Care and Household niche.

The company launched in 2014 but is not a traditional MLM because it was a re-launch of Neways International.

One of the reasons Modere has gotten a warm welcoming into the MLM world is because it is eco-friendly, at least their manufacturing and distribution facilities.

Neways International was sold in 2013 and was renamed but there is one staggering stat that is promising at least from a money making standpoint.

It was bought by Z Capital and they stated that the ownership was new and the management was as well.

With that being said, the CEO remained the same which means they said one thing and did another.

This isn’t a big deal in the grand scheme of things but it is worth mentioning.

The CEO is a man named Robert Conlee and this is not his first MLM experience.

He was President of a company called Nu Skin and the CEO of Xango.

At least the leadership has experience because without great leaders, the company would be doomed.

Let’s take a look at the product line.

Aside from leadership, a great product line is the most important part of a company.

There are a lot of products to go over so I will simply go over the categories.

If you want to see the entire product line, you can click, HERE.

One of the best things about Modere is that they use safe ingredients and are focused on the environment.

There were several sources I found that said their manufacturing plant is run on 100% wind power.

I understand that this might not be important to some people but this is the kind of thing that people can get behind.

The last thing I would like to point out is the fact that I found no comments from anyone other than bias affiliate reviews, which are completely worthless.

All they are is a sales pitch which will never tell you about any shortcomings.

Anyway, let’s check out the compensation plan to see if there is any money to be made.

OK, first thing is first! Here is the Modere Comp Plan PDF, which I highly recommend you read and get familiar with.

This is not only to make a decision about Modere but with most MLMs that you review before making a final decision.

Trust me, most of them are similar and some are almost identical.

You will want to read this and pay close attention to the fine print because your knowledge of the compensation plan could be the difference between success and disaster.

Since I think that you should be involved in analyzing the compensation plan, I will list the ways you can make money and leave the rest up to you.

If you have any questions after you finish with the review, I would be glad to answer them.

OK, that is a lot of perks and bonuses that can be taken advantage of IF…………

There it is folks, this is all you need to make a ton of money with this company.

I use to wonder why some MLMs don’t release Income Disclosure Statements on the website but now I know why.

You would be able to determine just how every MLM is a legal pyramid scheme.

The average percentage of active affiliates that make money in a given month is roughly 5% – 10%, depending on the MLM.

I think you know where I am going with this.

Yes, there are many ways of making money, but there are very few people that do.

Since there is no information on Modere in the BBB database, let’s just skip to my list of things to be wary of.

I found a comment from a person that obviously knows a bit about MLMs and has done research although I have a feeling they are somehow affiliated with Modere. 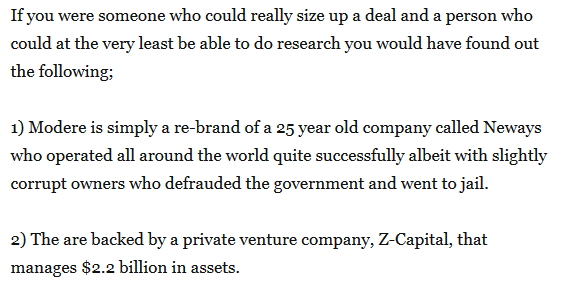 First of all, this commenter was very rude but had some good points in regards to facts about Modere.

You see, Modere is a re-launch of Neways International, which has a troubling past.

Here is a link of an article titled ‘Neways Founders Get 2 Years in Prison.’

The person making the comment is clearly sympathetic to these criminals because he/she refers to them as “slightly corrupt owners.”

They were convicted of a tax evasion and spent a few years in jail.

Nice spin buddy but you have to call it like you see it.

The reason Z Capital purchased the company is because the second the previous owners were indicted, Neways was worthless unless resurrected under a new identity.

They swooped in and bought the company and re-branded it.

The problem was, the current CEO of Modere is the same CEO of Neways, which is why they lied and said it is under new management.

That is only a half truth.

WEBSITE: The Website is lacking a lot of basic information like a lot of information in their ‘About Us’ page, Income Disclosure Statement or Compensation section.

I think it has a lot to do with the fact that they want to separate themselves from the Neways International stigma.

Of course this is just an assumption so I will leave it to you to make the final decision.

I will end by saying that the information about the company is really important and should be added so people know what they are getting themselves into.

RECRUITING: This part of the MLM world is depressing for so many reasons.

You have to be in sales mode constantly and you are a glorified door to door salesman.

That has got to get old really fast considering 99 out of every 100 people you approach won’t even listen to you for more than a second.

I have been really hard on Modere but for good reason. Yes, Modere has a sketchy past but they have been around for a few years and only time will tell if they are going to be around for a long time to come.

I am sure they will be considering that most countries allow MLMs to exist and put effort into protecting these pyramid schemes. Take a look at the USA; they have a Direct Selling Caucus within the government that protects these companies from any regulation at all.

Little do people realize, the MLMs that are protected by the caucus are providing legislators with campaign finance in return for protection.

All I can say to you is this: There are so many other ways to make money online. Why waste your time with MLMs in the first place. You have to invest so much time and money.

If you are able to find a good training program, you can learn how to set up your own online business. You can do it at little to no cost either.

An example of this is Wealthy Affiliate. There is ZERO recruiting involved and you can do it for free. There is literally no risk whatsoever.

If you want to check it out, read this review.

I hope this review helped you in some way.

If you have any experience with Modere or Neways International, want to ask a question or leave a comment, feel free to fill out the form below.