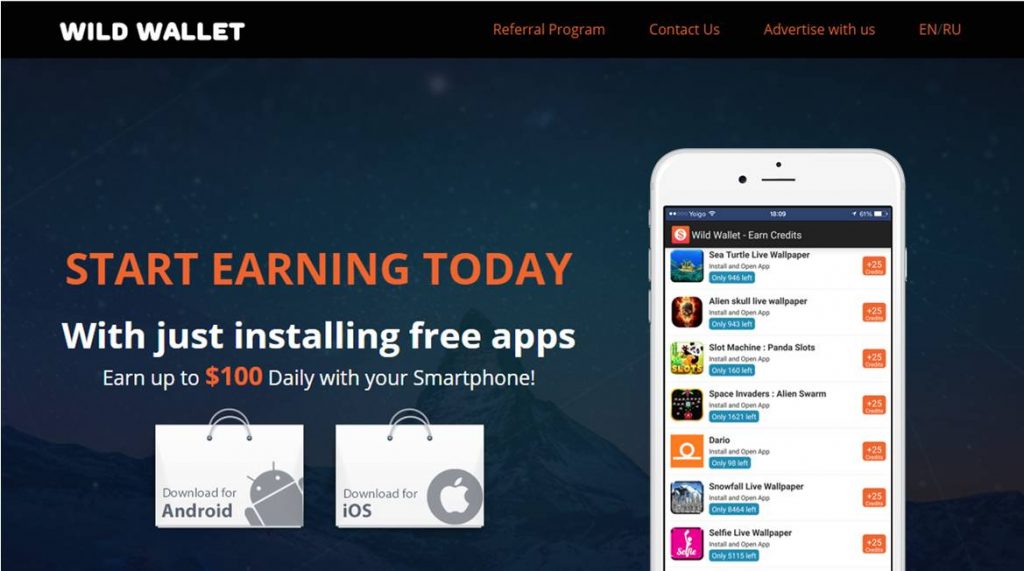 Downloading and installing apps is one opportunity to make money online that is slowly becoming more common. There are now a lot of apps offering this kind of opportunity, either as the main way to earn or as an added opportunity.

Wild Wallet is one such app that’s offering this kind of opportunity. It allows you to earn credits by downloading and installing apps on your mobile device.

Once you’ve earned enough, you can exchange your credits for rewards like cash or gift cards. The company claims that you can earn about $100 a day on the app.

But in reality, it would likely be about $1 a day, if you are really active. Is Wild Wallet, though, a scam or a legit opportunity?

The Wild Wallet App is a Scam that You Should Avoid

Wild Wallet is an app that is designed to make you money by downloading apps and using them. You will be paid in credits, which you can redeem for various rewards that the app offers.

The app started out great, as people are saying that they are receiving the rewards for the credits they redeemed. However, I now consider it a scam, as it looks like the app has stopped sending people their rewards.

There have been a lot more complaints about Wild Wallet not sending its rewards than people saying they got their rewards.

The app has also been taken out of the Google Play Store and Apple App Store, which is not a good sign. The website is still up, though, and you can still download the app there.

There are also other sites that make the app available but their version is not working properly, so I’m guessing its best to download it on the website.

As we move forward with this review, I’ll provide more details on why the app is now already considered a scam and why people are only earning about $1 with this app when it was still paying.

Who Uses the Wild Wallet App?

The Wild Wallet app was designed for two types of people, with one being app developers who are looking to get their new apps tested out or increase the downloads of their existing apps.

The other type are people like you who are looking for ways to make some money online using their mobile devices. For developers, the app provides them an opportunity to have real people download the app.

Wild Wallet will reward its members with credits for downloading and using the app. Developers can also dictate what members need to do on the app to earn the credits. 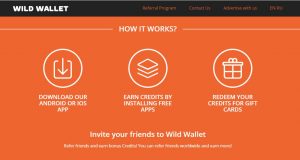 This ensures developers that not only will people download their apps, but also use them for a while. For people like you, Wild Wallet provides an opportunity to make some money using your mobile phones.

You will just need to download apps found on Wild Wallet and use them in order to earn credits. The credits you earn

can be redeemed for rewards like gift cards and cash.

The app can now only be downloaded via their website since it has already been taken down from the Google Play Store and Apple App Store. To register, you would just need to log in with your Facebook or Google Plus account.

How Do You Earn with the Wild Wallet App?

The main way to earn with the Wild Wallet app is by downloading and using apps. You will be paid in credits, which you can use to redeem for rewards like cash or gift cards.

Now the way to earn credits with the app is very simple and easy. You just need to download the apps found inside and use them for a while to get paid.

Wild Wallet has a variety of apps available that you can download, but most are game apps. Some apps will just require you to use it for a certain period before you get credits.

Other apps, though, will have a more concrete requirement before you get paid. Some requirements will include reaching a certain level, accomplishing a goal, and many more.

The number of credits you can earn will vary on the apps that you will be downloading. Some apps will pay you 25 credits, while others will pay you 30 credits.

There are even some apps that will allow you to earn 100 credits, but you have to complete the requirements that the app has before you receive your payment. 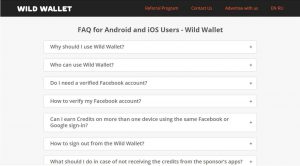 You can also earn credits if you share the app via your social media account, email, and even SMS. They don’t need to click anything, as just sharing it will allow you to earn credits one time.

But, if they click on the link and join Wild Wallet and use your referral code, you will earn credits as well for every person who joins.

The amount of points earned is not mentioned, but it seems getting referrals is the fastest way to earn more credits.

The credits you earn can be redeemed for different rewards. Wild Wallet allows you to redeem in cash to be paid via PayPal or gift cards.

The app has gift cards from great brands like Google Play, iTunes, Amazon, Steam, and more. The minimum cash out is also not mentioned on the app, but some are saying you will need 5,000 credits.

This is equivalent to $5 worth of gift cards or cash. Reaching this will likely take you about a week, or even longer, depending on the available apps to be downloaded.

What I Liked about the Wild Wallet App

After learning more about the Wild Wallet app and what it offers, it’s time to discuss what I liked about it.

What I Didn’t Like about the Wild Wallet App

There are actually a lot of things that I didn’t like about the app, but I’ll only discuss the most important ones that you would need to know.

Is the Wild Wallet App to be Recommended?

Since Wild Wallet is considered a scam, it’s an opportunity that I don’t recommend and I advise people to stay away from it.

You’d just be wasting your time, even if the app seems like it’s still working properly based on what you will see on their website. 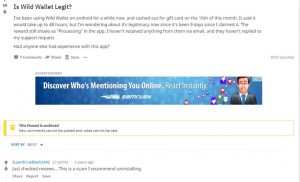 It’s possible that the developers are still not giving up the Wild Wallet app, but it’s very unlikely that the app will remain live.

It’s been 2 years since the complaints about the app not paying began, and it looks like the developers didn’t properly address the issue.

The website will likely shut down soon since the app is no longer available on the Google Play Store and Apple App Store.

Wild Wallet’s Facebook Page and Twitter account have also been taken down, so the website is likely the last to go. Even if the app is not actually a scam, I still don’t see myself recommending it.

My main reason for this is that the app only offers a low-income potential, as there’s no way you will be able to earn a good amount of money downloading and using apps.

You would have to rely heavily on referrals if you want to earn big money on Wild Wallet. If you’re going to rely on referrals, there are actually better opportunity available than what the app offers.

So regardless on whether the app is legit or a scam, I would still have advised you to stay away from this app and look at different opportunities.

You would just be wasting your time and effort with Wild Wallet, and you can use it for opportunities that are so much better.

AppBounty Review : Legit App Or Is It A Scam?